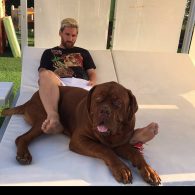 Giant Barcelona football superstar, Lionel Messi, just happened to end up with a giant sized companion. Given to Messi as a gift from his partner, Antonella Roccuzzo, in February 2016, his mastiff grew to massive proportions in a few short months. At the time of the massive growth spurt, Messi also happened to be out for 4 months or longer due to an injury. While many Barcelona fans may be upset, I’m sure his new companion is very happy to have him around the house. 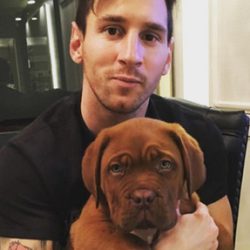 Lionel Andrés “Leo” Messi, born June 24, 1987, is an Argentine professional football player playing for the Spanish FC Barcelona and Argentina national team. At the age of 13, he was relocated to Spain due to growth hormone deficiencies. Despite having medical issues at an early age, Messi managed to overcome the odds and made his competitive debut at the age of 17. Messi is now an all-time leading goalscorer for Argentina, won the 2005 FIFA World Youth Championship, finishing the tournament with both the Golden Ball and Golden Shoe, and an Olympic gold medal at the 2008 Summer Olympics. 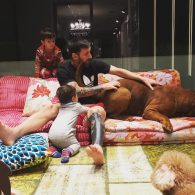 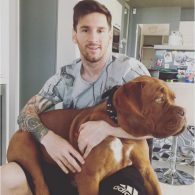