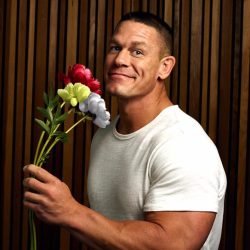 John Felix Anthony Cena is an American professional wrestler and actor born on April 23, 1977, who has an estimated net worth of $55 million. He is best known for his career in the WWE, which he is currently on hiatus from. He started his pro-wrestling career in 1999 with the Ultimate Pro Wrestling (UPW), where he won the championship the next year. This win got him a developmental contract with the WWE in 2001, with him joining the main lineup in 2002. While his personas have been controversial over the years, he is considered one of the faces of the WWE over the 200s and 2010s. His WWE career includes 16 world championship titles and 12 WWE Championship titles.

His Hollywood acting career started with The Marine in 2006. This was followed up with 12 Rounds (2009), Legendary (2010) and The Reunion (2011). He’s most recently been known for his starring roles in Trainwreck (2015) with Amy Schumer and Sisters (2015) with Tina Fey and Amy Poehler. He’s also known for his philanthropy and has granted over 500 wishes for the Make-A-Wish Foundation, which is the most in the organization’s history.