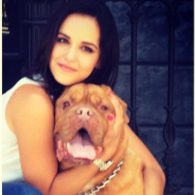 Bella was a much-loved French Mastiff rescue who passed away in 2014. RIP Bella!

Melissa Fumero (née Gallo; born August 19, 1982) is an American actress. She plays Amy Santiago on Brooklyn Nine-Nine (2013-present) alongside Andy Samberg and Chelsea Peretti. She is also known for portraying Adriana Cramer on One Life to Live (2004, 2008), and Zoe on Gossip Girl (2010). In 2015 she won the NHMC Impact Awards for Outstanding Achievements and Contributions to the Positive Portrayals of Latinos in Media for her role in Brooklyn Nine-Nine.