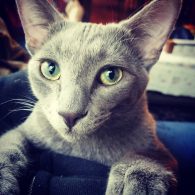 Frances Miffy Goes to the Zoo

Known as Frances for short, this cat was picked up by Mayim at a local shelter. She got his name from her son, who’s a fan of the kid’s book Miffy Goes to the Zoo. 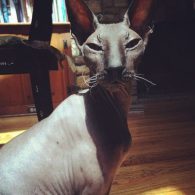 Mayim another cat named Esau that she got over a decade ago. She fell in love with this hairless cat in a pet store and had to take him home. She has since become an active supporter of rescue cat adoption. 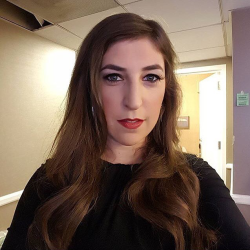 Mayim Chaya Bialik is an American actress and neuroscientist born on December 12, 1975 who has an estimated net worth of $12 million. She is best known for starring as Blossom in the TV series of the same name, as well as her role as Dr. Amy Farrah Fowler in The Big Bang Theory. Her started acting in her teens with small film and TV roles in the late 1980s. In 1990, she was cast in two TV sitcom pilots, one called Molloy and the other Blossom. Her starring role in Blossom was success which lasted for four seasons, making her an iconic 90s sitcom character.

After the show ended in 1995, she mainly worked in voice acting. Also during this time, she attended university, where she went on to earn a Phd in neuroscience at UCLA. After having children, she returned to acting which gave her more time with them. She then landed a temporary role playing a neuroscientist and potential love interest of Jim Parson’s character on The Big Bang Theory. This lead to her being brought on as part of the main cast mid-way through season 4, joining Jim Parsons, Kaley Cuoco, Johnny Galecki, Simon Helberg, Melissa Rauch and Kunal Nayyar.