Helberg adopted three rescue cats in 2011 and named them after famous fictional detectives. Marlowe acts like a dog and comes when you call his name. Clouseau is the biggest but acts like a little baby. Columbo is the smallest and is always attacking everyone. 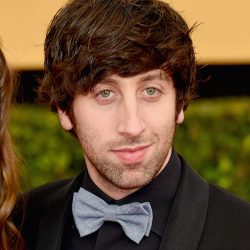 Simon Maxwell Helberg is an American actor and comedian born on December 9, 1980 who has an estimated net worth of $45 million. He’s most famous for his starring role as Howard Wolowitz in the TV sitcom The Big Bang Theory, which also won him a Critics’ Choice Television Award in 2013. With his dad an actor and mom a casting director, Helberg got into acting and comedy at a young age.

He trained at the Atlantic Theater Company before teaming up with comedian Derek Waters as “Derek & Simon” in the early 2000s. In 2002, he joined the cast of MADtv for one season. For the next few years, he had a variety of small film and TV roles, including Van Wilder, Old School, Reno 911!, Walk Hard: The Dewey Cox Story and more. In 2007 he landed landed a lead role in The Big Bang Theory, co-starring Jim Parsons, Kaley Cuoco, Johnny Galecki, Mayim Bialik, Melissa Rauch and Kunal Nayyar.