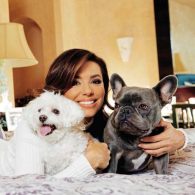 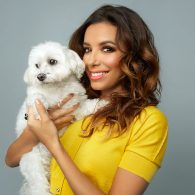 Jinxy, Eva Longoria’s Maltese, passed away June 2018. He was well-loved and is survived by his brother Popeye, the Frenchie.

Eva Jacqueline Longoria Bastón (March 15, 1975) is an American actress, producer, director, activist, and businesswoman. She first got her breakthrough in Hollywood with her role on The Young and the Restless (2001-2003). Longoria later became a household name for her role as Gabrielle Solis on the ABC television series Desperate Housewives (2004-2012).

Longoria is married to Jose Baston. The two have four children (three of which are from Baston’s first marriage) Sebastian, twins Natalia and Mariana, and Santiago Enrique (Longoria’s first biological child).