Bautista says Frankie is like an old man, usually quiet but can be quite grouchy. Sadie is the oldest and most independent of the trio.

Janie is young at heart and still acts like a puppy. She is a Catahoula leopard dog, which is the state dog of Louisiana and known as a strong, hound-like breed that works in forests and swamps. 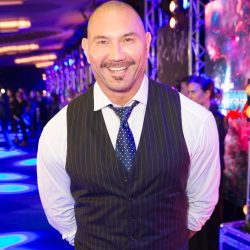 David Michael Bautista Jr. is an American actor and former professional wrestler born on January 18, 1969, who has an estimated net worth of $13 million. After experience as an amateur wrestler and bodybuilder, he was signed to the WWE. Known by his ring name Batista, he was part of the WWE from 2000 to 2010 and 2013 to 2014. He won the WWE Championship twice and the WWE World Heavyweight Championship four times.

He started his acting career in 2006, with his first notable roles including The Man with the Iron Fists (2012), Riddick (2013) with Vin Diesel and James Bond: Spectre (2015) with Daniel Craig. He is best known for starring as Drax in Marvel’s Guardians of the Galaxy Vol. 1 (2014) and it’s sequel, alongside Chris Pratt, Zoe Saldana and Bradley Cooper.

Bautista is an advocate for animal rescue and adoption. He’s also appeared in a Humane Society video to help fight the negative stereotypes of certain dog breeds, such as pit bulls.