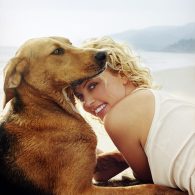 Theron currently has one rescue named Tucker who she says is very sweet, reserved and aware. She adopted him way back in 2001 and he’s still going strong. 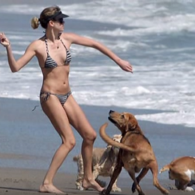 Theron has had a many rescue dogs over the years and is believed to only have Tucker right now, but has taken in many rescues over the years, with some passing away. She had Orson, which was a Dane-Dalmatian mix in the early 2000s. Denver and Delilah were two cocker spaniels she had in the late 90s/early 2000s. She adopted Berkley (a terrier mutt) and Dog Pitt (a pit bull) in the early 2010s. She has been photographed with a number of other dogs and we imagine they might often be foster dogs she’s caring for. 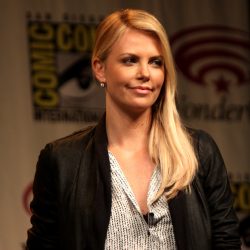 Charlize Theron is a South African actress born on August 7, 1975 who has an estimated net worth of $120 million. One of the most popular and highest-paid Hollywood actresses today, she is best known for her lead role in Monster (2003) which won her an Academy Award, Golden Globe and Screen Actors Guild Award for Best Actress. First starting as a dancer in her early teens, she won a modelling contract at 16, leading her to move to Italy with her mother. After she moved with her mom to the States, where she trained as a ballet dancer. When she was 19, her mother bought her a one-way ticket to Los Angeles to pursue acting.

Her career took off in the late 1990s with main roles in films such as Mighty Joe Young with Bill Paxton, Cider House Rules with Tobey Maguire and Paul Rudd and Devil’s Advocate with Al Pacino and Keanu Reeves. By the early 200s, she was considered an A-list celebrity, starring in many top films, leading up to her award-winning role in Monster (2003). Her most recent notable roles have been starring in Mad Max: Fury Road (2015) with Tom Hardy and The Fate of the Furious (2017) with Vin Diesel and Dwayne Johnson.

Theron is a big animal rights activist and has appeared on the cover of Animal Fair magazine three times and has worked with PETA and other animal groups. Growing up in South Africa, she became passionate about both animal and human rights.