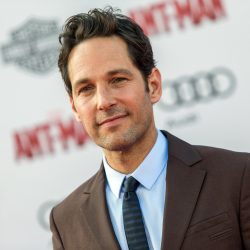 Paul Stephen Rudd is an American actor and comedian born born April 6, 1969 who has an estimated net worth of $25 million. After majoring in theater in university, his his first professional acting job came in 1992 with the TV series Sisters. He left the series for his first film supporting role in Clueless (1995), starring opposite Alicia Silverstone. His first notable role was a recurring role on the last two seasons of Friends (2002-04), playing Lisa Kudrow’s boyfriend.

His acting career took off in 2004 thanks to working with producer/director Judd Apatow, who put him in the lead cast of Anchorman: The Legend of Ron Burgundy with Will Ferrell, Steve Carell, David Koechner and Christina Applegate. He appeared in supporting roles is several more Apatow films through the late 2000s, such as Knocked Up with Seth Rogen and Katherine Heigl and Forgetting Sarah Marshall with Jason Segel, Jonah Hill, Mila Kunis, Russell Brand and Kristen Bell. In 2012 went on to play the lead in Wanderlust with Jennifer Aniston and This is 40 with Leslie Mann. Most recently he’s known for starring in Ant-Man (2015) and other Marvel Cinematic Universe films.