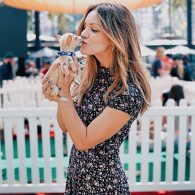 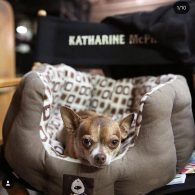 Larry was another one of Katharine McPhee’s senior Chihuahuas. RIP Larry.

Katharine McPhee, born March 25, 1984, is an American actress, singer, and songwriter. She became known in 2006 when she was the runner-up on the fifth season of American Idol.

McPhee is also known for her acting career, co-starring in The House Bunny (2008) and Shark Night 3D (2011). Her lead role on the TV show Smash (2012-2013) as well as CBS’ Scorpion (2014–2018) have also gained her notoriety. McPhee entered theatre following her father, Daniel McPhee’s death. She stars as Jenna in Waitress on Broadway.