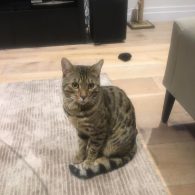 Having Nigerian heritage, Boyega gave his bengal cat a Nigerian name. We’re not sure if he’s joking, but he said on Instagram he got the cat because the price was half-off on a Sunday. His nickname is BIM BIM. 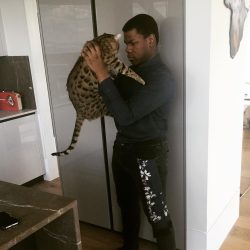 John Boyega is an English actor born on March 17, 1992 who has an estimated net worth of $2 million. He is best known for his starring role as Finn in Star Wars: The Force Awakens (2015). He appeared in his first play at age nine. He was noticed for his acting talent by an artistic director, who motivated him to join her learning theater. He spent time with the learning theater from age 9 to 14, as well as taking part in high school productions. He continued his acting through college with a performing arts diploma and training at the Identity School of Acting.

His first major role was the lead in the independent film Attack the Block (2011) which earned him critical praise and many award nominations for his performance. After some TV appearances and a few more film roles, he was revealed as part of the lead cast of Star Wars: The Force Awakens with Oscar Isaac, Adam Driver and Daisy Ridley. He’s set to return to the role in 2017 for Star Wars: The Last Jedi.