Bezos had a dog in the 1990s named Kamala, named after a lesser-known Star Trek character. 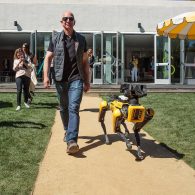 Bezos was photographed with SpotMini in March 2018, his new robot dog created by Boston Dynamics, the famed American robotics and engineering company. This electric-powered pooch can run for 90 minutes before recharging and weighs around 55 pounds (25 kg). SpotMini made headlines in Feb 2018, when a video of it opening a door despite a human trying to stop it, as a showcase of how robots will eventually take over the world. 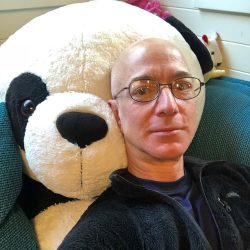 Jeffrey Preston Bezos (January 12, 1964) is an American entrepreneur, investor, and philanthropist. He is best known for being the founder, CEO and chairman of leading online retailer Amazon. With a net worth of $130 billion, he is noted as the world’s richest person and the first person to be worth over $100 billion.

Since a young age, Bezos always showed an interesting in science and technology, eventually graduating from Princeton University with Bachelor of Science degrees in computer science and electrical engineering. After graduating, he found work in telecommunications and then banking. After finding success in banking through his 20s, he left to launch his first online venture with an online bookstore named “Amazon” out of his garage. He always planned to expand from books to other products, eventually doing so through capital raised in 1998. After several rough years in the early 2000s, Amazon eventually turned around in 2003 and has grown steadily since. He is also known for founding Blue Origin, a human spaceflight startup and for buying The Washington Post for $250 million cash in 2013.