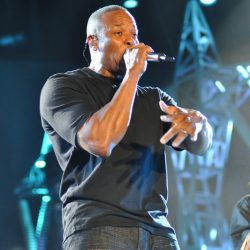 Andre Romelle Young, better known as Dr. Dre, is an American music producer, rapper and entrepreneur born February 18, 1965. Thanks to his success as one of the greatest hip hop producers, but mainly thanks to his co-ownership of Beats Audio which was sold to Apple, he has an estimated net worth of $700 million.

Dr. Dre broke into the mainstream in the late 1980s in the group N.W.A. with Ice Cube, Eazy-E, MC Ren and DJ Yella. This lead up to his 1992 debut solo album The Chronic, which featured Snoop Dogg, who Dr. Dre had just discovered. That same year he produced Snoop Dogg’s debut album Doggystyle. The critical and commercial success of both these albums cemented Dr. Dre as one of the best hip hop producers of his generation. This was followed up in 1999 with his album 2001, which was also a massive success. Through his production, guidance and his record label Aftermath Entertainment, he was behind the careers of legendary rappers including Snoop Dogg, 2Pac, Xzibit, Eminem, 50 Cent and more.

His biggest business partnership was with Beats Audio, which he founded with Interscope Records co-founder Jimmy Iovine in 2008. Beats was bought by Apple in 2015 for $3 billion, which earned Dr. Dre around $500 million for his share in the company.