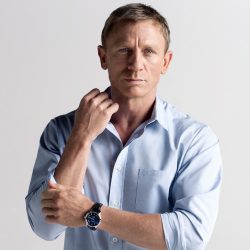 Daniel Wroughton Craig is an English actor born March 2, 1968. He is best known for his portrayal of the iconic fictional spy James Bond, which is behind most of his estimated $95 million net worth. He started training as as an actor at a young age, attending the National Youth Theater and the Guildhall School of Music and Drama. After smaller roles in movies and TV shows, his first big production role was co-starring in Lara Croft: Tomb Raider with Angelina Jolie in 2001. His first major starring role was in the British crime thriller Layer Cake (2004), co-starring Tom Hardy and Sienna Miller, followed up with Steven Spielberg’s Munich.

In 2005 he was announced he would appear as the sixth actor to play James Bond, taking over for Pierce Brosnan. First met with doubts by fans and critics, his performance as Bond in 2006’s Casino Royale was met with great reviews and ended up being the highest-grossing Bond movie at the time. This was followed by Quantum of Solace, Skyfall and then Spectre in 2015.

Craig’s Other notable roles includes Defiance (2008), The Girl with the Dragon Tattoo (2011) and Cowboys & Aliens (2010), co-starring Harrison Ford. He has yet to confirm if he’ll return as James Bond for future films. While he has expressed he’s tired of playing the character, rumors have still spread saying he has been offered $150 million to return for two more Bond films.