Cate doesn’t use any social media and keeps her life private. She has three dogs, named Carol, Fletcher and Egg. She has been photographed with her family and Fletcher, a black lab.

She also has a Tonkinese cat named Warwick. 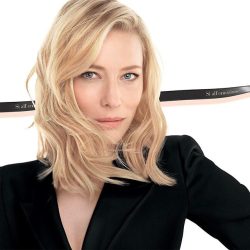 Catherine Elise “Cate” Blanchett is an Australian actress born on May 14, 1969 and has an estimated net worth of $45 million. She is best known for her critical acclaim, winning two Academy Awards, three Golden Globes, three BAFTA Awards, three SAG Awards and many more. She developed an interest in acting in college, moving on to study economics and performing arts at university. She dropped out to travel for a year and after joined and graduated from the National Institute of Dramatic Art.

She started her acting career in theater, with her first major stage role in Oleanna with Geoffrey Rush for the Sydney Theater Company. After several major film roles in the mid and late 1990s, she gained international acclaim for playing the lead in the 1998 film Elizabeth. This role won her a Golden Globe and BAFTA award. In 2005, she won her first Oscar for best supporting actress in Martin Scorsese’s The Aviator, which costarred Leonardo DiCaprio and Kate Beckinsale. Her most recent major role is in Thor: Ragnarok with Chris Hemsworth and Tom Hiddleston.