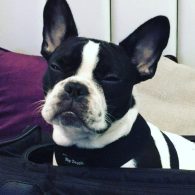 Gypsy is Madonna’s French Bulldog. She was a gift for the Queen of Pop’s 57th birthday from her children.

Madonna Louise Ciccone, born August 16, 1958, is an American singer, songwriter, actress, and businesswoman. The “Queen of Pop” Madonna is an iconic figure in pop culture. Known for transcending genres and breaking boundaries, her art often sparks controversy and inspires praise from music critics. Madonna has reinvented her music and her own image within the recording industry, becoming an inspiration for generations of pop music following her. She is a philanthropist, starting the Raising Malawi foundation in 2006 which is dedicated to improving the lives of orphaned Malawi children.

Madonna has written and produced most of her songs, with many of them reaching number one on the record charts, including Like a Virgin, La Isla Bonita, Like a Prayer, Vogue, Take a Bow, Frozen, Music, Hung Up, and 4 Minutes. She has often been deemed the most influential female recording artist of all time.