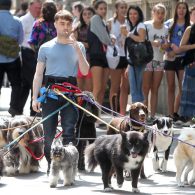 Daniel Radcliffe has two border terriers named Binka and Nugget. He’s pretty private about his life and doesn’t have public social media accounts, so we haven’t seen any pics of his two dogs. On a Reddit AMA when asked if he was a dog or cat person, he replied “Dog. Very, very firmly in the dog camp here.”. In 2014 he did have a photo of him go viral, which showed him walking a pack of dogs while having a cigarette. It was later confirmed he didn’t own those dogs or had a side job as a dog walker. The photo was taken on the set of Judd Apatow’s Trainwreck, starring Amy Schumer. 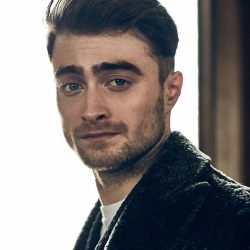 Daniel Jacob Radcliffe is an English actor born July 23, 1989. He’s best known for starring as Harry Potter in the film series based on the Happy Potter novels by J.K. Rowling. Mainly thanks to the massive success of the 8 Harry Potter films, he has an estimated net worth of $100 million. He started his acting career at the age of 10, with a role in the TV movie David Copperfield. His first feature film role was in 2001’s The Tailor of Panama.

Also 2001 at the age of 11, Radcliffe was cast in his iconic role as Harry Potter. Author J.K. Rowling was looking for an unknown British actor to play the lead, with director Chris Columbus seeing Radcliffe in David Copperfield and thinking he was perfect for it. With the book already a huge success, the first movie was also expected to be a hit, which earned Radcliffe a 7-figure salary to start. Titled Harry Potter and the Philosopher’s (Sorcerer’s) Stone, it also launched the career of then 11 year old Emma Watson. Radcliffe continued to play the role of Harry Potter for a decade, with the final and 8th movie released in 2011. The ticket sales of the 8 film series is estimated at over $7.7 billion.