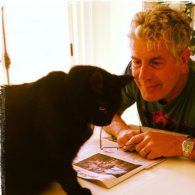 With one black cat, Bourdain has said he’s a more of a cat person than dog person. As a legendary international foodie, has been accused of eating dog, but has said he hasn’t and will never eat a cat or dog. Lupetto translates to “little wolf” in Italian and was named by Bourdain’s ex-wife Ottavia. It’s unknown who Lupetto lives with since their separation. 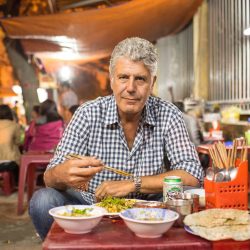 Anthony Michael Bourdain is an American TV personality, author and chef born on June 25, 1956 who has an estimated net worth of $16 million. Passionate about food since a child thanks to his parents, he pursued a career as a chef in his teens. After graduating the Culinary Institute of America in 1978, he went on to work for and run various restaurant kitchens, often as executive chef.

He became a restaurant industry celebrity at age 44, when he published his first book Kitchen Confidential in the year 2000. Based on his experience as a chef in New York and his views on the industry, it became a New York Times bestseller. This led to the Food Network offering him to host a food and travel show called A Cook’s Tour, which premiered in 2002 and concluded with 35 episodes and a book.

Next he launched a new travel and food TV show on the Travel Channel called Anthony Bourdain: No Reservations. It ran from 2005 until 2012 and made him one of the most famous chefs in the world. This was followed up with the TV show The Layover from 2011-2013. He currently hosts the CNN show Anthony Bourdain: Parts Unknown, which premiered in 2013.