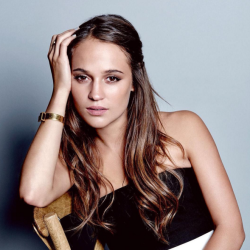 Alicia Amanda Vikander is a Swedish actress born October 3, 1988 and has an estimated net worth of $4 million. She started acting at seven years old in theater and TV productions. She also trained in ballet from age nine until she was 16 at the Royal Swedish Ballet School and the School of American Ballet, before focusing fully on her acting career.

Her first starring role in a feature film was in Pure (2010) which won her a Swedish film award for best actress. After several critically acclaimed performances in European films, she went on to continue her critical success in Hollywood. Playing opposite Eddie Redmayne in The Danish Girl (2015) she won an Oscar and Screen Actors Guild Award for Best Supporting Actress. She also won a BAFTA Award for Best Actress in a Supporting Role for Ex Machina (2015). She’s currently set to take over Angelina Jolie’s role as Lara Croft in the Tomb Raider reboot film.