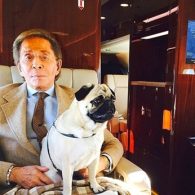 Maude is Valentino’s ride or die, she is the only one of the pugs who always travels with him. 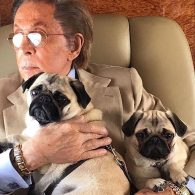 One of Molly’s daughters, Margot enjoys rides in her daddy’s private jet. 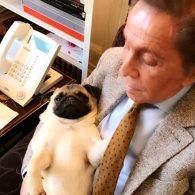 Maggie likes to hide under the hems of her daddy’s $100,000 dresses during fittings. 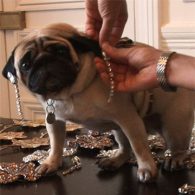 Molly is the mother of Valentino’s large pug broad. 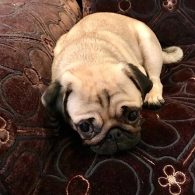 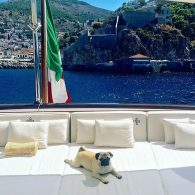 Valentino has a private car for his pug children (except for Maude who rides with him, always). 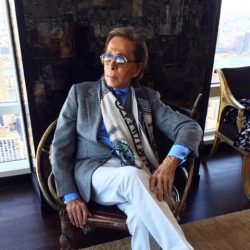 Valentino Clemente Ludovico Garavani who is simply known as Valentino in the fashion world was born on May 11, 1931. He is an Italian designer who founded the Valentino SpA brand and company. He began his work in Italy, eventually showing pieces in New York where he had his first major breakthrough when John F. Kennedy’s wife, Jacqueline Kennedy custom ordered six haute couture dresses. His clothes have since been worn by Audrey Hepburn, Princess Margaret and Elizabeth Taylor, to name a few.

Valentino’s success within fashion is unsurmounted, he has since retired in 2008 spending his time jet-setting around the world to his many different properties. He is surrounded by his entourage, which includes six pugs. Valentino has a reported net worth of $1.5 billion dollars.