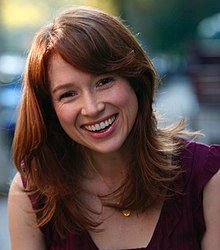 Elizabeth (Ellie) Kemper (born May 2, 1980) is an American actress and comedian. Her breaking role came as Erin Hannon in the NBC series The Office (2009-2013). She is widely known for her leading role as Kimmy Schmidt in the Netflix Original comedy series, Unbreakable Kimmy Schmidt (2015-present) alongside Tituss Burgess, Jane Krakowski, and Tina Fey. Kemper was nominated for the Screen Actors Guild Award for Outstanding Performance by a Female Actor in a Comedy Series in 2015 and Emmys in 2016 and 2017 for her performance as Kimmy Schmidt. She is also known for her supporting roles in the films Bridesmaids (2011) and 21 Jump Street (2012) alongside Channing Tatum and Jonah Hill.

Kemper began her education in theater and improvisational comedy while in high school. At John Burroughs School, one of her teachers was actor Jon Hamm, with whom she appeared in a school play and later the film Bridesmaids. She continued her interest in improvisational comedy while in Princeton, and later at the University of Oxford. In her early days, she was a contributing writer for the satirical newspaper The Onion, McSweeney’s, and The Huffington Post. She has made appearances on numerous film and television shows, including as a co-anchor for The Today Show (2015).

Kemper is married to Michael Koman, a former writer on Late Night with Conan O’Brien, and the co-creator of the Adult Swim series Eagleheart (2011-2014) and Comedy Central series Nathan for You (2013). They have a son, James, who was born in 2016.