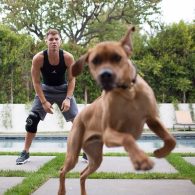 Chaney is Griffin’s BFF – the two hang out and watch games together. Griffin says Chaney was named after John Chaney, the Temple coach.

Blake Griffin, born March 16, 1989, is an American basketball player for the Detroit Pistons in the NBA. When playing college basketball for the Oklahoma Sooners, he was one of the highest rated and most decorated recruits; he was named the Consensus National Player of the Year as a sophomore. Griffin was selected first overall by the Los Angeles Clippers in the 2009 NBA draft. He is a five-time NBA All-Star and a four-time All-NBA selection.

Griffin has two children with ex-Brynn Cameron, a son, Ford Wilson Cameron-Griffin, and a daughter named Finley Elaine Griffin. The couple broke up in 2017, shortly before his relationship with Kendall Jenner started, which was widely publicised.