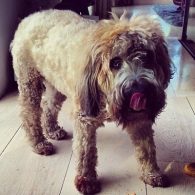 Ella (aka Eleanor) was a Wheaton Terrier who Ali Larter had for 16 years before she passed away in June of 2017. RIP Ella. 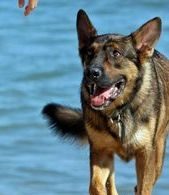 Jackpot is a German Shepherd who loves to hike with his mom, Ali Larter.

Ali Larter (born February 28, 1976) is an American born actress and former model. She was discovered by a modelling scout on the street when she was 14 years old, which led to a contract with Ford Models in New York. In the 90’s Larter took on guest roles in television series like Dawson’s Creek, Just Shoot Me!, Suddenly Susan, and Chicago Sons. She made her film debut in 1999 after landing a role on Varsity Blues with Jason Van Der Beek, Paul Walker, and Amy Smart. Following this role, Larter made appearances in Giving It Up, Drive Me Crazy, and the remake of House on the Haunted Hill.

Larter has also had roles in Legally Blonde (2001) with Reese Witherspoon, Final Destination 1 & 2 (2000 and 2003), the Bollywood film Marigold (2007) and Obsessed (2009) with Beyoncé Knowles-Carter, and the NBC Sci-fi drama Heroes (2006-10). She achieved fame throughout the video game world with her portrayal of Claire Redfield in Resident Evil: Extinction (2007), Resident Evil: Afterlife (2010) and Resident Evil: The Final Chapter (2016). She finished authoring her first cookbook, Kitchen Revelry: A Year of Festive Menus From My Home to Yours in 2013.

Ali Larter is married to Hayes MacArthur, an American stand-up comedian, actor and writer who currently stars in Angie Tribeca. The couple have two kids, Theodore and Vivienne Margaret. The family lives in a 2.9 million dollar home Hollywood Hills.