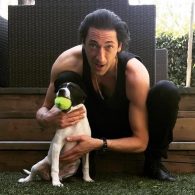 Chicken was adopted by Adrien Brody in March 2017. Chicken blows up Brody’s Instagram account, showing just how dog-obsessed The Pianist actor is! 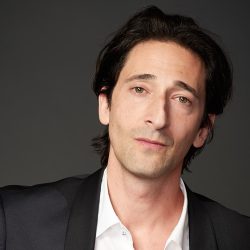 Adrien Brody (born April 14, 1973) is an American actor and producer. He most notably starred in Roman Polanski’s The Pianist (2002), which won him an Academy Award at 29 years old, making him the youngest person to ever win said award. He is also the only male American actor to receive the César Award for Best Actor. Amongst other, smaller roles, Brody has also starred in The Thin Red Line (1998), The Village (2004), King Kong (2005), and Predators (2010).

He’s starred in three of Wes Anderson’s successful films, The Darjeeling Limited (2007), Fantastic Mr. Fox (2009), and The Grand Budapest Hotel (2014). Brody is known for being mentally and physically committed to his roles. He has made appearances on Saturday Night Live, The Today Show and Punk’d. Brody also made his debut as a runway model for Prada Men in the Fall/Winter 2012 show.