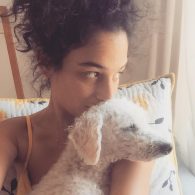 Reggie is a senior Bichon Frise. He was chosen from a pet store by Jenny Slate following a disastrous job interview. Reggie currently has seven teeth and a mouth that smells like a “dead crab”.

Slates role in Obvious Child earned her a Critics Choice Award for Best Actress in a Comedy, Best Breakout Performance at the Newport Beach Film Festival, the Virtuosos Award at the Santa Barbara Film Festival, and Best Comedic Actress at the Women Film Circle Awards. She’s an accomplished stand-up comic, and advocator for senior dog adoption.