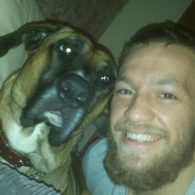 Hugo is often seen on McGregor’s social media, sometimes training with him. 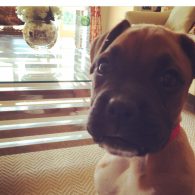 Benjamin is a puppy McGregor got for his parents in June, 2016.

Conor Anthony McGregor is an Irish professional mixed martial artist signed to the Ultimate Fighting Championship. He was born on July 14, 1988 and is worth an estimated $35 million. He is known for being the reigning UFC Lightweight Champion and the former UFC Featherweight Champion, as well as for his public persona. He is also known for being the first UFC fighter to hold titles in two weight divisions at the same time, as well as the biggest draw in UFC pay-per-view history.

He is most recently known for promoting a boxing match between him and the undefeated and retired boxer Floyd Mayweather Jr, set to take place late in 2017.